We waited many months for the day to come, but yesterday, Commercial Dive Services BVI (CDS) were finally available to come, in their own time and free of charge, to float the wood and fiberglass remains of the iconic 65ft trimaran Wanderlust, moving her off the sandy bottom of our mooring field where she has been snugly nestled at the bottom of the bay for the 16 months since Irma swept through the British Virgin Islands… 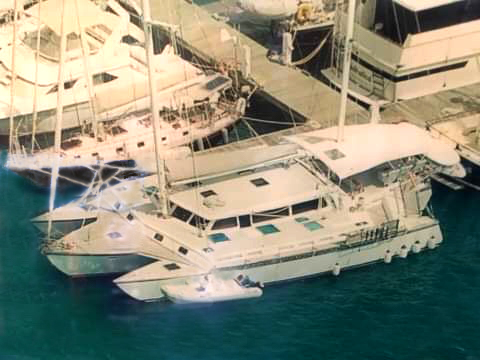 Wanderlust in her prime

Wanderlust was one of the most iconic and famous yachts in the British Virgin Islands and in the late 1970s, she was host to Sir Paul McCartney and his post-Beatles band Wings, where the group recorded tracks for the album London Town. The name Wanderlust became synonymous with freedom for McCartney, who later wrote a song entitled “Wanderlust” on the appropriately named “Tug of War”.

Once the team from CDS got down there Wanderlust was floated easily enough but below the waterline in the anchor locker, the guys trying to release her from the shackles of captivity were struggling to free the final 1/2” chain, the last remaining point of attachment.

Wanderlust barely looked like she was floating when the team first attempted to drag her out of her comfort zone. The boys from CDS began by using their smaller motor catamaran workboat, equipped with two 300hp Mercury outboards on the back. The wreck swayed with each motion of exertion by the cat, yet she remained stuck fast in the mud.

The team decided more horsepower was required so called in Lady G, a powerful, snub-nosed boat resembling an angry hippo; squat, low on the water, and ready to tackle any job. She almost looked as though she had a keen and excited facial expression, appearing eager to get tugging at the wreck.

Attempts were made to pull from the bow and directly to the marked channel. Wanderlust was having none of it, lurching at each pull, but each time slowly withdrawing back to her spot on the sea floor. Lady G’s turbos were screaming out loud and spewing clouds of carbon effort, all to little avail.

At first, Wanderlust was being yanked at her bow, with attachments to the big cleats. These lasted about ten minutes each before they were unceremoniously pulled out of the bow. The CDS guys decided to try pulling from the stern, thinking maybe she was more stuck down on that end. A line was attached to the biggest winch on the end but that lasted less than half a pull from the Lady G. Out popped the big winch, to cries of disgust from the CDS crew.

Not to be deterred, the team revisited the bow again and a line was choked around the windlass itself. This was clearly the spot to be attached. Slowly but surely, Wanderlust began to edge her way forward, albeit from side to side on some of the pulling attacks. She was now facing a good 90 degrees away from her original long-time rest direction of SSW, leaving her pointing directly at the channel. At this point, she seemed stuck on a small hump and movement stopped.

The 7/8” towline started snapping consistently, much to the frustration of all of us watching patiently for this sore scab to be picked off and “healed” away, so the smaller workboat was sent away to Paraquita Bay to fetch a bigger 2” tow line, which would surely do the trick.

The new tow line was choked on the windlass again, and the zigzagging maneuvers to get the wreck out continued, this time with great success. Back and forth 90 degrees pulling slowly got Wanderlust into the channel, when suddenly the windlass itself, which would easily weigh in at 250lbs, was ripped off the bow and flung about 60 feet away from where she was once attached. Nerves were shot and “under the breath cussing” was subtly heard, but evident from various locations around East End Bay. Wanderlust did not look like she wanted to leave, as if she knew the fate that awaited her.

Wanderlust was due to be sunk the very same night in a remote and secret location, away from prying fishermen and where only a few would know of her final resting place on the seabed. She would form an artificial reef, allowing for the growth and repopulation of this secret spot, encouraging the grouper fish to return and flourish. All fish love wrecks, and so, therefore, do the local fishermen! 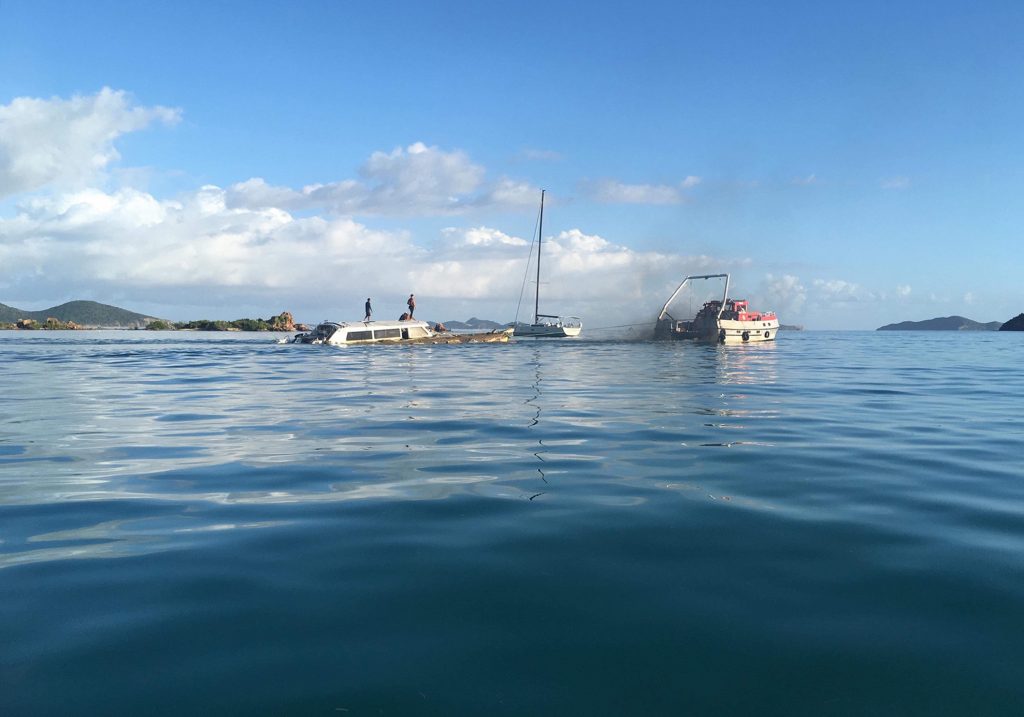 At this point, I was certain Wanderlust was going to spend another night in the channel but the CDS had other ideas and somehow managed to secure the tow line to the bow. The tugging continued and screams of joy and enthusiasm were heard as the wreck was finally on a continued forward movement, albeit at a slow pace. For a while, we were worried she would be stuck in Chalwell’s mooring field as their concerned crowd watched but with this last obstacle overcome, Wanderlust was out and free.

CDS must be complimented on their generosity for taking on this removal on behalf of the previous owner pro bono, gratis and for free. It was a very long hot day for the guys out on the water but the job was done. Kudos to the team on the day!

Wanderlust was on her way and the last I saw of her was as she rounded Red Rock Point on a secret easterly heading toward her final resting place.